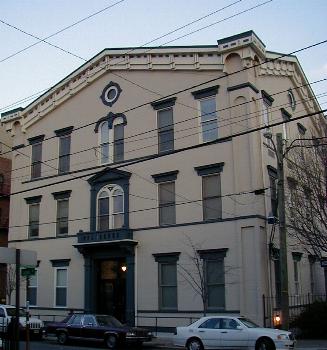 Designed with Italianate detailing, Pohlman's Hall is atop the Palisades overlooking Hoboken, with a view of the New York Skyline. Originally, next to the Hall was a steam-powered elevator from the base of the cliff. In 1884, a trolley trestle climbing from Hoboken to Jersey City took the place of the elevator.

Pohlman's Hall served the vibrant turn-of-the-century German immigrant community of the Jersey City Heights, Union City, and Hoboken as a restaurant, tavern, hotel, and gymnasium. Once America entered WWI, public displays of Teutonic culture and pride no longer were possible. Assembly by Germans was proscribed; the doors of Pohlman's Hall closed. After that, a boiler plant operated here. The structure now provides luxury residential housing.

Hudson County, New Jersey is a place of many firsts - including genocide and slavery.
Political corruption is a tradition here.
First in a series by Anthony Olszewski – Click HERE to find out more.